451 tassels turn as the Class of 2022 become Haverford alumni 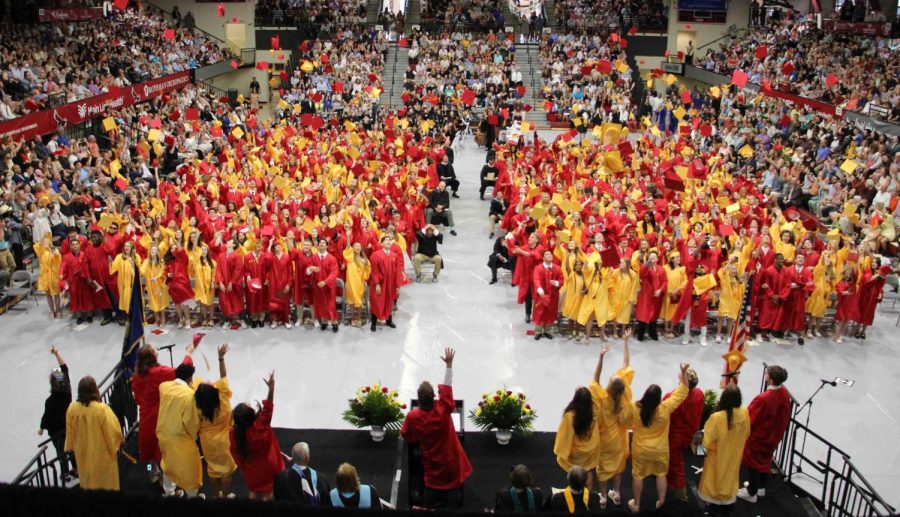 The Class of 2022 tosses their caps into the air in celebration of their graduation.

Families and friends filled St. Joseph University’s Hagan Arena, chatting with familiar faces around them, holding bouquets of red roses and fathead cutouts of their soon-to-be graduates. 451 empty seats in the center of the arena waited expectantly for the Class of 2022.

Music teacher Joseph Brennan raised his hands to begin conducting his 35th and final graduation orchestra performance, as he will be retiring after 37 years of conducting Haverford’s orchestra. The murmuring crowd hushed as the Junior class officers and volunteers entered the arena, clad in blue gowns, proudly raising the American and Pennsylvania flags, as well as a banner for each Haverford elementary school. They were followed by Principal Pete Donaghy, Superintendent Dr. Maureen Reusche, and other members of the school board and administration. Haverford High School teachers, dressed in black gowns with their university-colored hoods, took their places, proudly standing along the rows of empty seats.

Alex Lauff, a Senior class officer, opened the commencement ceremony by introducing the Class of 2022, who filed into the arena, some walking confidently forward, others craning their necks for a peek at their friends and family in the stands. The Fords took their place in the center of the room, a sea of red and gold.

The senior choir members circled a microphone on the arena floor, while the underclass choir performed from stands above the stage. Jose Luis Policarpio conducted the choir through the Star-Spangled Banner, and Erin Hughes took his place to conduct Haverford’s Alma Mater.

Emma Taylor introduced Zach Scullin, and the two friends gave each other a high-five, as she passed the mic to Scullin. Scullin’s commencement speech tied TikTok to the high school experience. “Like a TikTok video, our four years at Haverford were fleeting,” Scullin said, “but we’ve managed to fill them with memories that will sustain us in the future with joy, maybe a lot of laughter, and hopefully, a little wisdom.” He spoke about the prevalence of music at Haverford, the band, orchestra, and choir, singing valentines, and the Drama Club, as well as the athletics department and successful teams. In his final words to the Class of 2022, Scullin personally congratulated his twin brother, Nate, and then the senior class.

Bridget Wiedeman, the Haverford School Board President, introduced by Class Officer Katya Scott, spoke about the strength of the Haverford School District. She pointed out that the incoming kindergarteners will be graduating in 2035, a fact that prompted some raised eyebrows and shocked murmurs from the audience. Wiedeman concluded her words to the seniors and audience with the familiar phrase, “Roll Fords.”

Class officer Claudia Stuck prefaced Principal Donaghy’s speech by noting his enthusiasm and competitiveness. Principal Donaghy reached under the stand and pulled out a thick, hard-cover book. “This book is called ‘Ford Fables,’” he announced, showing the cover to the room. The fairytale-inspired “book” followed the journey of the Class of 2022 from their elementary school years until this moment. The “book” featured clever renamings of Haverford locations, such as “the brook of line” and “the dock of Paddock.”The elementary schools were dubbed “small castles”, and the “larger castle” (Haverford Middle School) was ruled by the “venerable bow-tied king”, to which the applause for Principal Dan Horan crescendoed. Principal Donaghy once again showed the room the book, where an image of Haverford High School was displayed. The staff of Haverford was honored for their “nobility” to roaring applause. The Class of 2022 fairytale concluded with the classic phrase “and they lived happily ever after – the end.”

Dr. Maureen Reusche reminded the seniors of the lessons they had learned in elementary school: share everything, play fair, don’t hit people, put things back where you found them clean up your own mess, say you’re sorry when you hurt someone, wash your hands before you eat, and watch for traffic, hold hands, and stick together. The ever-energetic R.J. Buehler, who introduced himself as the “sexiest man alive”, recognized the senior name-callers who would receive their diplomas first: Emilia Gonzalez, Zachary Kasuba, Tiger Newman, Emma Phillips, Emma Taylor, and Sophie Tomov.

All 451 graduates had their moment to shine as they crossed the stage in their red and gold gowns, and accepted their diplomas from Principal Donaghy. There were a few special moments when graduates received their diplomas from a relative who was also a staff member. Emma Taylor was handed her diploma by her mother, Math teacher Christa Taylor, while Jacalyn Cuozzo was handed hers by her grandfather. Another special moment was when Tiger Newman was able to call his brother, J.R. Newman and the two shared an elaborate handshake.

The audience erupted the second the final graduate sat down. Once the cheers quieted down, R.J. Buehler once again took the stage to remind the Class of 2022 that “there is no pause button in life, so take in every minute, reminisce in your accomplishment and above all, live in the moment.” Buehler led the graduates in the turning of the tassel to the left side of their caps and 451 hands moved in unison to enter the next phase of their lives. The new alumni then tossed their caps into the air in a flurry of red and gold.

The 2022 graduates filed out of the arena to receive their diplomas from their homeroom teachers in the adjacent room. Friends and family were able to congratulate the graduates outside Hagan Arena in a crowd full of laughter and smiles. Haverford teachers could be heard cheering as their bus drove back to the high school.

The Class of 2022 had survived the last four years with the COVID-19 pandemic, a presidential election, and countless other global, national, and personal challenges, and yet it had also thrived. These graduates formed clubs, including (but in no way limited to) E-Sports, Haverford Sports Media, and Haverford Against Hunger. They dominated in athletics, with several Central League Champions and finalists among them such in Ice Hockey, Cross Country, Softball, and Basketball. They achieved academic victories in Hi-Q and AP scores, as well as artistic success in Drama Club, orchestra, competition band, and choir. The Class of 2022 alumni have left their mark on the Haverford community and will continue to accomplish great things in their future endeavors.

The Fordian congratulates the 2022 graduates and wishes them the best of luck in the future.