Fords HUDA fight their way to the Radnor Invite Championship through rain, sleet or shine 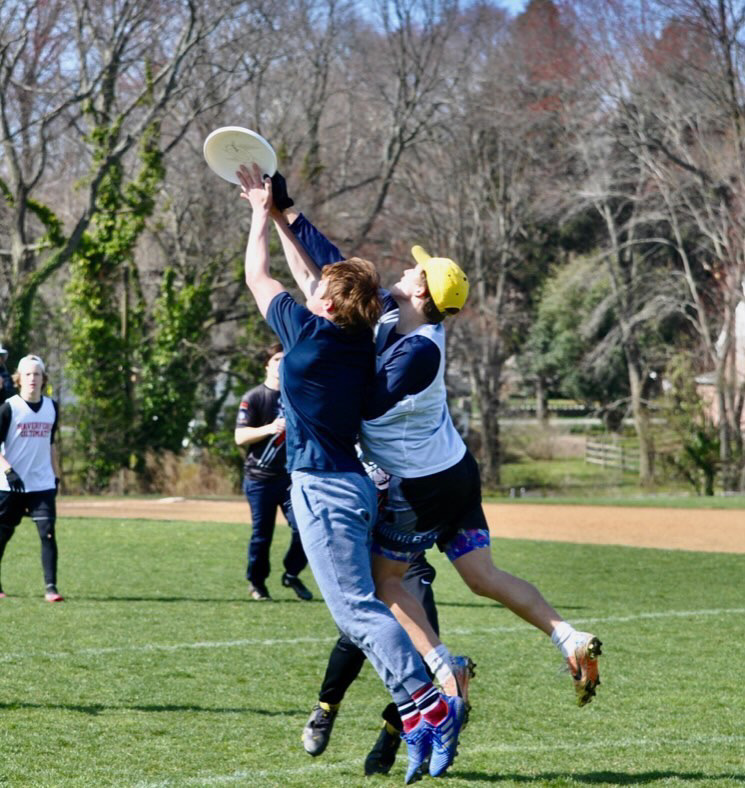 Junior Captain Ethan Sarles leaps for the disc in an attempt to score for the Fords.

To open the Radnor Invite, the Haverford boys’ HUDA team played the Strath Haven Panthers. The Fords started slowly, down three to nothing, but with good leadership by Coach Simon Feeman, the team began to gain the motivation and the energy needed to dominate. After a timeout by Coach Simon, the team was rejuvenated, but they still battled back and forth for points. Then, right before the end of the half, the Fords scored a difficult upwind point, which blew open the gates, allowing for a four-point run to end the half.

In Ultimate Frisbee, games are up to 13 points. It was 7-5 Fords out of the half. Fords HUDA continued to bring their energy into the second half, taking the lead 9-5. But the Strath Haven Panthers did not give up. The energy took Haverford HUDA to go up by 3 unanswered points.  Finishing the game 13-6, there was a deep huck from Junior Danny Bell to Senior Nick Ford. It gave the team the wake-up call they needed for the tournament.

Now the Fords had to maintain this energy into the next two games against Harriton and Salesianum.

In the second game against Harriton, Haverford did exactly that. Right out of the gate, they struck. Senior Brandon Fallice scored a whopping four points before the half. At halftime, the score was seven to two. For the rest of the game, the Fords dominated on offense and especially on defense. Senior Captain Ethan Wolfe had four blocks on one point. The team played an amazing zone and worked together for their second win, 13-5. They made up for a 9-8 loss two weeks before at a Wissahickon warm-up.

In their third and final game of the first day, the boys continued to compete at a high level. They focused and dominated from deep points by Senior Ty Vesco and once again Senior Nick Ford. But none of that would have been possible if it were not for the amazing flicks, hammers, and backhand throws by Junior Captain Ethan Sarles. Fords HUDA finished destroying Salesianum 13-6, placing themselves into the semi-finals against Brooklyn Tech.

After the first day, Coach Feeman said, “Ultimate is a slightly different and new sport for people, and people have to figure out and focus on how to attack and bring that energy to games.” He added, “This builds a good base, and the first couple of games proved that if we stick to that, we will make some good throws and make some good plays and begin to win all of our games . . .and with those difficult windy turns, the focus is on how fast can you turn and quickly get it back. And that’s what we did.”

The following day the Fords came out hot with JV taking a win over Strath Haven’s JV, which built the momentum for the varsity matchup against Brooklyn Technical. Haverford struck fast out of the gate with 3 points immediately, but Brooklyn Tech did not travel to PA with any intention of losing. Brooklyn Tech quickly turned around after scoring a point and went on a 5 to one run making the score 5-4 right before the half.

Silencing the Fords sideline, Sarles called for a timeout. With Wolfe, the captains gathered the team and hyped everyone’s spirits. This gave them the will to come back into the game. HUDA scored immediately, giving an uppercut to Brooklyn Technicals’ hopes of winning. The Fords scored back-to-back points and took the lead 7-5 at the half. In the second half, HUDA stretched their lead and dominated with passes. Senior Nick Ford came in the clutch with 3 deep points combined with great work on defense, and Haverford finally stopped the threat of the Brooklyn offense. HUDA finished Brooklyn Technical 10-7, sending them back to New York and sending HUDA to the Championship vs. Strath Haven.

After the stressful game, Junior Captain Sarles said, “It’s definitely tough being down, but making sure everyone was playing hard and to their fullest ability is definitely key. When the energy was up, it allowed us to punch out those points and get us to win that game which made all the difference. Being able to set the score aside and focus on each other, allowed us to just play our game…which really got us in the right headspace.”

This was a great way to start and bring that hope into the championship game, which due to rain, hail, and the wind was delayed.

The championship game will be played at Old Manoa field tomorrow so make sure to show up and support the team!