Haverford Track & Field has a field day at home invitational 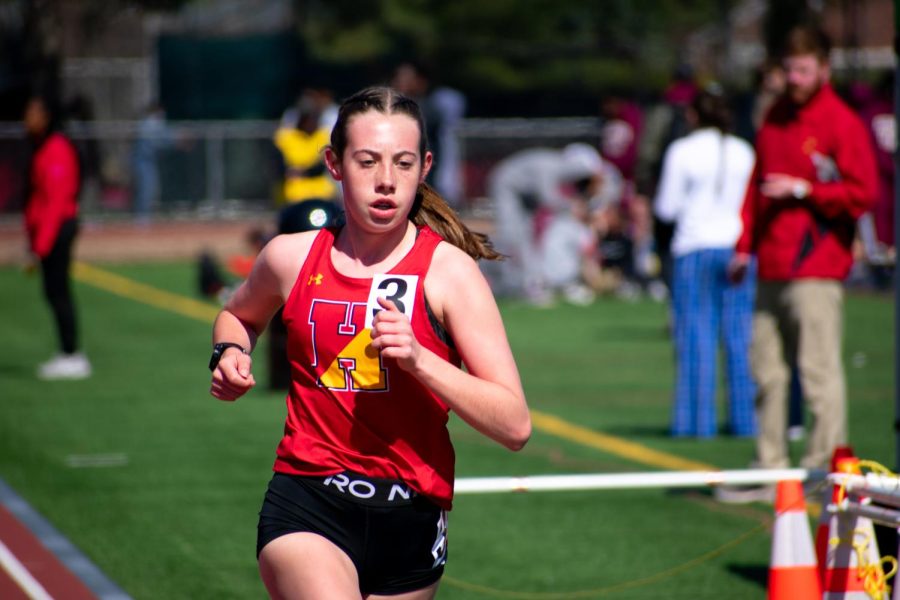 Freshman Camryn McGeehan pushes ahead to finish the girls' 3200-meter run with an impressive time under twelve minutes.

This cloudless Saturday, Haverford and twenty-seven other high schools took the stage at A.G. Cornog Stadium as they prepared for an exciting day. Though the Fords had a relatively slow morning, the pace picked up as Senior Mike Powel took first in the shot put with an impressive throw of fifty-two feet and two inches, beating Pottsgrove by over ten feet.

Haverford also commanded the track as both 4×800 teams took first place. The girls secured the win with Freshman Olivia Cieslak taking the final stretch, lapping multiple runners in the process. The rest of the team, Juniors Morgan Elliott, Aubrey Leneweaver, and Sophomore Mackenzie Gillespie ran the first six laps, setting the team up for victory. Juniors Gabe Zwilling, Patrick Lawson, Quentin Ryan, and Senior Ethan Fingerhut won the boys’ 4×800 with a time of seven minutes and fifty-seven seconds. Ryan said, “it was Ethan’s first time leaning over the finish line,” referring to Fingerhut’s dramatic dive at the end of the race.

Junior Tiernan O’Neill took the third heat of the boys’ 400-meter dash, easily escaping the grasps of the rest of the runners. Sophomore Abato Dantonka also won his heat of the 110-meter hurdles, leading the race towards the beginning, but really letting the gap close at the final stretch, ending with a final time of eighteen seconds. He said that “[his] coach tells [him] ‘you’ve got it, you’ve got it,’” which pushed him to succeed. Cieslak seized another victory during the 800-meter with an impressive time of two minutes and fifteen seconds.

Overall, the day was a major success for the Fords, as they clinched multiple titles. The next meet will be on Saturday, April 9th, as the girls will hopefully take a few wins for the Delco Relays at another home event. Be sure to show up and support them!

The Haverford Sports Media broadcast from the invitational can be found here, as well as next week’s Girls’ Delco Relays and future Haverford sports events.