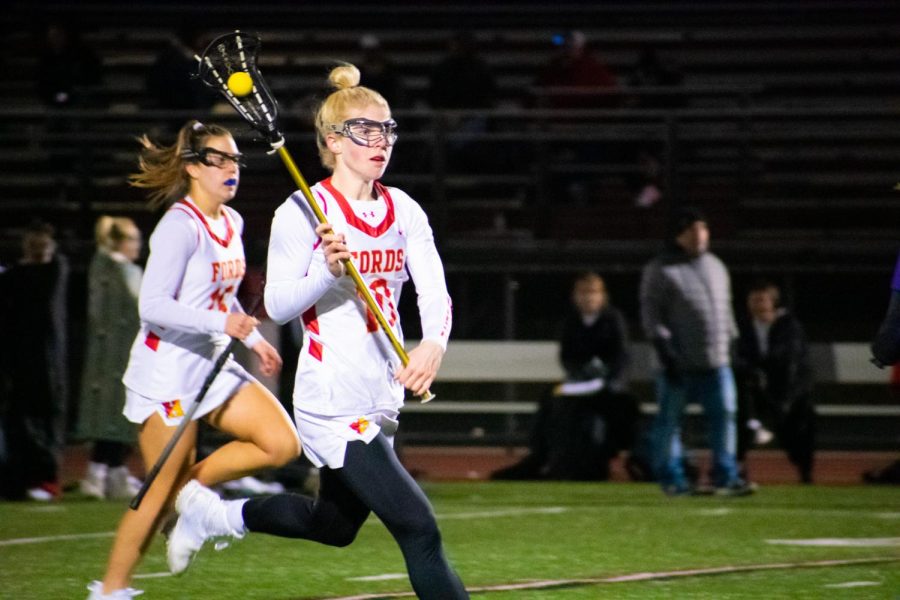 Senior Emma Rowland sprints across the field in a successful effort to score.

The weather at the opening faceoff is freezing. Even with some wind circling around, the Fords girls lacrosse team did not seem to get the memo. From the opening minute, the Fords scored and continued to do that 17 more times in an 18-2 stomping of the neighboring Upper Darby Royals. The favored Fords started off with a 1-0 lead. However, the Royals answered right back with their own goal, tying the game up at 1. After each team traded blows in the opening two minutes, the Fords rattled off 7 goals straight, until the Royals answered with a Kerrin Kanoe goal with 9:33 left in the first half.

The Royals wouldn’t score for the rest of the game. In a hopeful display of what is to come in future games, the Fords’ suffocating defense helped solidify their first victory of the year. Last week the Fords started their 2021-22 campaign with a disappointing 14-4 loss to the defending D1 champions Bishop Shannahan.

Senior Emma Rowland led all scorers with 5 goals. The Old Dominion University commit seemed ready to go from the start. With the additional motivation of entering her last season, Rowland is determined to get her team back into the PIAA district playoffs. Yesterday, they got the start they wanted. Junior Becca Patterson was the second-leading scorer with 4 goals of her own. When asked about the game, she said “there were definitely some nerves for it being our first home night game… at the end, it definitely became a confidence boost for us going in against Radnor.”  Besides the duo of Rowland and Patterson, the Fords had 7 other players get goals, including Sophomore Hilary Elsner with 2. The depth of the Fords’ skill was on display, which will be pivotal if they want to repeat as winners Thursday against the visiting Raptors of Radnor.