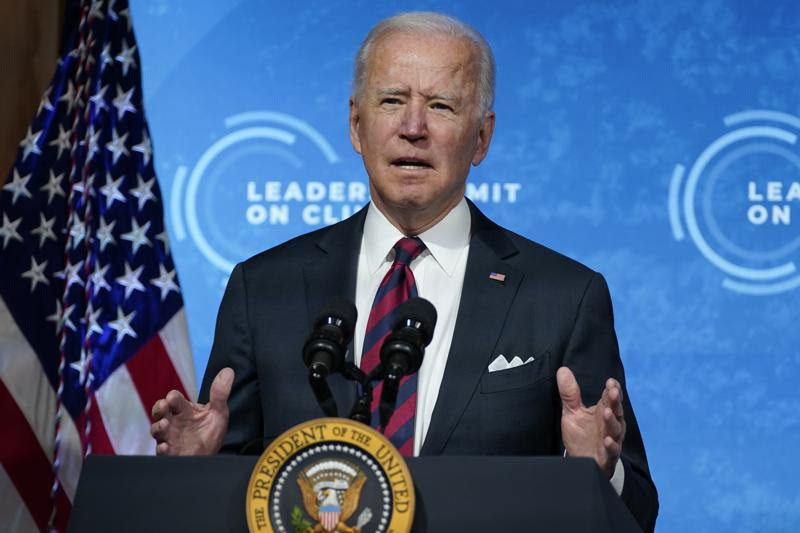 President Joe Biden speaks to the virtual Leaders Summit on Climate, from the East Room of the White House.

After providing immediate national relief during the COVID-19 pandemic through vaccine distribution, President Joseph R. Biden and his administration have begun to focus on a wider range of issues. During his first 100 days in office, the President has signed a flurry of executive orders; he signed more executive orders and memorandums than the last 3 presidents in their first 100 days. Due to unprecedented national and global circumstances, the government and the executive branch in particular are focusing on economic recovery. Along with these issues, the continued debates around the severity of climate change, immigration policies, and foreign affairs are also very prominent topics that require current attention.
Economic Policies
Following the tragedy of COVID-19, the economy was in shambles, unemployment was on the rise, businesses were struggling to stay alive, and Biden’s main objective was to stabilize the economy and create jobs. Biden signed a $1.9 trillion COVID relief bill that invested money back into the economy and gave Americans stimulus checks, provided unemployment increases, helped small businesses, and granted tax breaks. States were also given $350 billion to combat the loss of revenue that came as a result of the pandemic. In February and March, 1.3 million jobs were added. However, April’s job report was disappointing and went against most economists’ expectations. The effects of this plan will be realized over the year following the signing of the bill. Included in Biden’s executive orders is a payment pause on student loans until October of 2021. This affects almost 42 million people who are repaying student loans. Efforts were also made to give food to struggling households who were unable to get all the food they needed. This was done in the form of an executive order which contributed to services that specialized in food distribution.
Environmental Policies
The Biden administration has taken great strides in moving America towards a more eco-friendly society. This began with Biden reversing many of former President Trump’s policies. President Biden re-joined the Paris Agreement by signing an executive order on the day of his inauguration. In addition, he signed an executive order which forced federal agencies to revisit the policies from the Trump administration, which covers topics such as gas leaks, air quality, and other issues. Another major event was Biden’s executive action to convene a world climate summit that would bring the leaders of the top carbon-emitting nations together to make more aggressive pledges than had already been made. During the summit, Biden committed to cut the carbon emission levels from its level in 2005 by 50%-52% by 2030. Although Biden has made these commitments, there have been no official plans that have been passed to reach these figures.


Immigration Policies
One of President Biden’s main commitments was to reform the immigration policies from the previous administration. On February 18, Democrats in Congress revealed Biden’s Immigration Plan. The U.S Citizenship Act is perhaps the most important aspect of this program. This act will “keep families together” and provide an 8-year path to citizenship for undocumented immigrants. By making U.S citizenship more easily attainable, President Biden hopes to create new solutions to ongoing border conflicts. This plan also looks to increase border security with technology and infrastructure. Additional funding will be allocated to the DHS (Department of Homeland Security) to achieve these ambitious goals.

Along with this law and the immigration plan in general, the President also has revoked the travel ban on many Muslim nations that was imposed by the Trump Administration. Immediately after coming into office in late January, the travel restrictions on Muslim majority countries were lifted. This action exemplifies the Biden Administration’s approach towards immigration. “Embracing diversity” is a phrase that is part of the President’s Immigration Plan and, when compared with the previous administration, actions are being taken to ease border hostilities and improve inclusiveness. President Biden has also discontinued funding for the wall along the Mexican border. Government spending and construction of the wall immediately came to a halt in late January and the President has made it clear that he has never supported this project. All of these laws and actions have a common goal: to provide new immigration policies to ease current tensions around U.S borders.
Foreign Affairs
The United States has had a prominent role on the world stage for centuries and the new administration is now tasked with balancing foreign involvement. Immediately after entering office, President Biden recommitted to the World Health Organization (WHO) after former President Trump withdrew the nation from this body. Last year, in May, the former president severed ties and funds into the WHO amidst the outbreak of the COVID 19 pandemic. The United States has now resumed its involvement within this organization that oversees global vaccine distribution. This process will continue in the following months to further prevent the spread of the virus.

In these early months of his presidency, Biden was faced with renewed conflict in the Middle East between Israel and Palestine. Historically, the United States has supported the nation of Israel and its creation in 1948. U.S President Harry Truman was the first world leader to recognize Israel after its establishment and, since then, America has recognized and defended the belief that the nation should have the right to defend itself. The Palestinian perspective, which has historically not been supported by the American Government, focuses on the losses of land endured by Palestinians that have occurred throughout the past half-century. President Biden has not been entirely open on his opinions about this debate. He has, however, clearly stated that he believes Palestinian and Israeli peoples deserve to equally share land and live safely. The United States, in recent years, has given Israel significant funding; in 2019, it is estimated that Israel received over $3 billion of U.S aid.
To Summarize:
The President and his administration have had a busy first few months. The pandemic initially required and still does, significant attention. The COVID-19 pandemic can distract Americans from the economic, environmental, and immigration policies that have been implemented in these past months. Overall, President Biden has created a very challenging and encompassing agenda that is comprised of diverse programs. It has been interesting to observe the government’s actions in response to the epidemic, climate change, and foreign crises. While it is impossible to know how successful the President’s policies will be on a long-term basis, it is important to recognize the work he has done so far to attempt to restore normalcy and economic prosperity for the country.