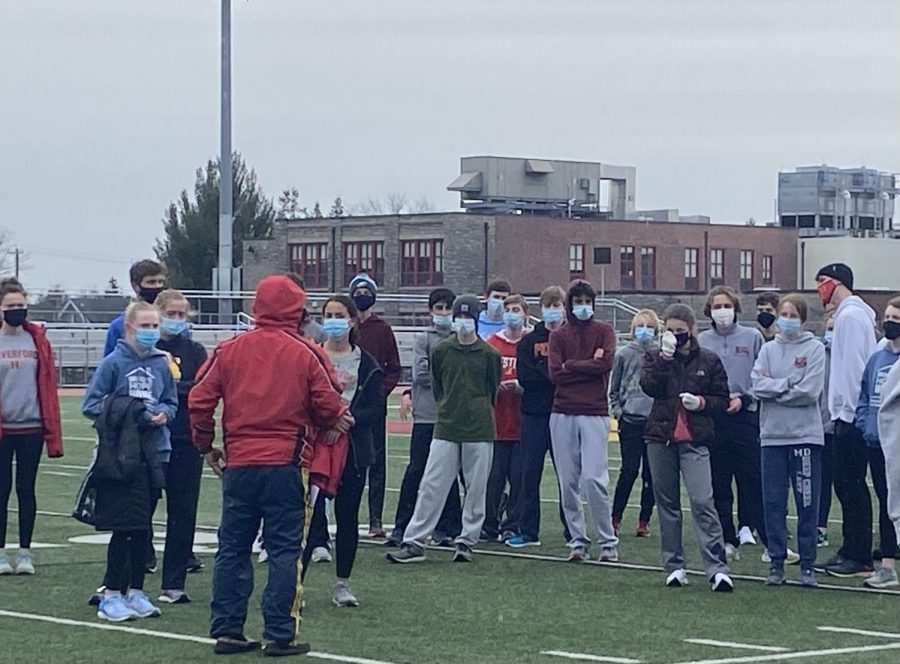 Due to the pandemic, the Haverford Track and Field team has experienced some changes including wearing masks for safety.

After the completion of the winter season, the new spring season is underway for the Haverford Track and Cross Country teams, who have vigorously trained throughout the year. Due to the additional practices, the boys and girls merged into one team, and they have become faster, stronger, and closer to their teammates.  Friendships are one thing, respect is another. The runners not only learned more about each other, but they also studied new tactics to guide them to victory. While these athletes brought out the best in each other, the coaches cheered them on throughout their meets.

Coaches Gregory Meyers and Amber Jenkins strive to achieve new accomplishments this season. With 21 years of experience in the sport, Meyers was inspired to become a coach after training under great coaches himself. Despite the pandemic, Coach Meyers sees the positives in this season as the team adds more practices and builds stronger connections with the merger of the boys and girls teams for practices. The track and cross country teams spend the majority of their practices warming up before heading into the weight room for exercises such as lifting. Since mask requirements and social distancing are the only major changes, the teams are able to pursue the rest of their spring season.

Coach Jenkins, who is coaching high school girls track and cross country for the first time, believes in running every race like it is your last. She describes the high school experience as “intense” since the team consists of students who are passionate and want to “go to the next level.” Despite the shortened seasons, Jenkins has not noticed any negative changes in the team and their behavior. She spends her time assisting other coaches through warm-ups and inspiring the girls to dig deep and bring out the best in themselves. Jenkins, who comes from a family of runners, puts passion into her work as a coach. She believes that even though the season has been cut short, the additional practices will provide long-term benefits of progress and team bonding.

Erica Borbi, a senior and this year’s Homecoming queen, has spent her time at Haverford running track and making lasting memories with her friends. Borbi loves to run, even outside of practice. For her, the social distancing and mask requirement have been a difference in their regular practices, but not significant enough to distance the team itself. Since quarantine, Borbi has gotten into investing and keeping tabs on her friends. Most of her best memories come from being part of the team, such as when they traveled to New York in February of 2020. Preparing for the Lower Merion meet after spring break,  Borbi says, “I’m hoping for success, I’m hoping to put smiles on a lot of faces, I’m hoping for some good laughs, and I’m hoping for a fun time.

Sophomore and cross country runner Patrick Lawson sees running as one of his favorite activities. Lawson has been running since the beginning of kindergarten. As he explains, running is not only a fun thing to do in and out of school, but it is something that helps clear the mind. When Lawson runs, he often considers his day and other various topics to keep him focused on what his next goal will be. “It’s been a lot harder to interact with our teammates and compete during the pandemic, but it hasn’t really changed us too much because, unlike other sports, we are still able to run every day.” In addition to getting lost in his train of thought, Lawson enjoys practicing with his friends. Outside of the sport, he also enjoys facetiming and phone calls to keep in touch with his friends during this pandemic.