Hanukkah: The Festival of Lights and Traditions 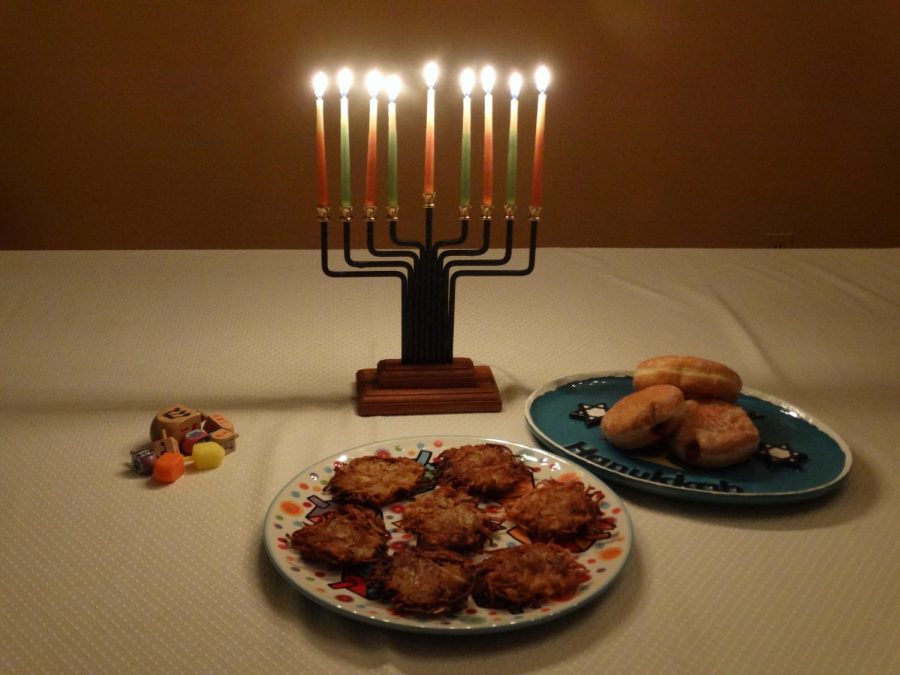 A menorah is lit, framed by the symbols of Hanukkah: Dreidels, Latkes, and Sufganiyot.

The sound of oil sputtering as latkes fry in the kitchen and the electric menorah glowing in the window can only mean one thing—Hanukkah. Otherwise known as “the festival of lights”, Hanukkah is a Jewish holiday that celebrates the rededication of the Second Temple in Israel, as well as the miracle of the oil in the temple that lasted for eight days instead of one. This year, Hanukkah begins tonight at sundown and ends Friday, December 18th at sundown. Throughout the holiday, Jews will set aside time every night to light candles and take part in other traditions that make the eight nights of Hanukkah full of family and celebration.

Food is an integral part of Hanukkah as it is customary to eat foods fried in oil, which represents the oil that burned in the temple for eight days. Latkes, a fried potato pancake made out of shredded potatoes and onions, are one of the most common foods eaten on the holiday. They are often served plain, topped with sour cream or applesauce, or dipped in ketchup. For dessert, jelly donuts, also called sufganiyot, are another fried food enjoyed during a Hanukkah celebration.

The hanukkiah, or a Hanukkah menorah, is a well-known symbol of the holiday that also celebrates the miracle of the oil. There are eight branches on the hanukkiah and one central branch which holds the shamash, commonly referred to as the “helper candle” because of its job to light all of the others. Each night, a new candle is added until the hanukkiah is fully lit and glowing on the eighth night. In addition to the traditional Hanukkah menorah, many people may choose to display a decorative electric Hanukkah menorah in their window.

Another tradition during the eight nights of Hanukkah is to play a game called dreidel. This entertaining activity involves a spinning top, also known as a dreidel, that has four Hebrew letters on each side: nun, gimel, hei, and shin. These four letters stand for the saying, “a great miracle happened there” which is a reference to the miracle in the Hanukkah story that took place in Israel. When playing dreidel, each person participating has a pile of gelt (chocolate coins) and takes turns spinning the dreidel. Depending on the letter displayed when the dreidel falls, the person who spun must follow a set of rules. If a participant spins gimel, they are allowed to take the entire pot of gelt, whereas if they spin nun, they get nothing. Hei allows the spinner to take half of the communal pot of gelt, and Shin forces the player to take a piece of gelt out of their own supply and put it in the communal pot. Dreidel is not only played for its significance to the holiday, but it is also a nice way to spend time with friends and family.

Lastly, a popular Hanukkah tradition is to give presents throughout the holiday. Despite its lack of historical significance, gift-giving has evolved to be a custom for many Jewish families. This does not necessarily mean that all eight nights are solely dedicated to presents as some people may choose to have a night reserved for donating.

Hanukkah is a time for families to enjoy each other’s company, whether it be for a few minutes to light the Hanukkah menorah or for a whole evening of Hanukkah celebrations. Due to COVID-19 restrictions, large celebrations will have to wait until next year, but many Hanukkah traditions can still be observed safely. Families can swap latke recipes, light the hanukkiah over Zoom, play dreidel with household members, or send gifts online. Hanukkah traditions are about celebrating miracles and spending time with loved ones, which is why they are enjoyed every year.