Go Off, Cyst: An Accutane Review 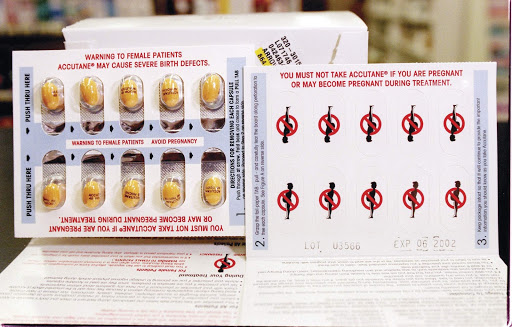 This is not intended as medical advice. This piece exists solely as a humorous narrative account.

Want it Before Prom? Order within Too Late and choose Two-Day Shipping at checkout.

Are you a teenager? Or just generally pimply? If your face is messed up enough, you’ve most likely heard of Accutane. As the good people over at Wikipedia put it, “Isotretinoin, also known as 13-cis-retinoic acid and sold under the brand name Accutane among others, is a medication primarily used to treat severe acne. … It is a retinoid, meaning it is related to vitamin A, and is found in small quantities naturally in the body.” This drug’s reputation certainly precedes itself, in more ways than one. As the strongest acne medication on the market, the high success rate is what most people commonly associate it with. However, Accutane is also notorious for its side effects. Severe dryness is what may first come to mind, but it can also cause birth defects and has been linked to depression. But don’t fret! There are plenty more unwanted symptoms where that came from! Let Accutane serve as a reminder that with great power comes great responsibility.

For those of you not hip to all things dermatological, Accutane is THAT drug. It’s a dermatologist’s last resort, but it is also the only thing that works for a lot of people. Some people go on to never have acne again while others report that their skin got worse, but the majority of people end up with minimal acne once they’ve finished their course. I fall into that last group, and I’m very grateful for the current condition of my skin. That being said, Accutane sucks while you’re still taking it. As if there weren’t already enough forums and blog posts dedicated to this subject, here is an Accutane rant from a real human of Haverford.

Photo Credits: Katie Gilroy, Rachel Plasky A comparison shot of Rachel Plasky’s face displays a significant improvement on the skin after the use of Accutane.

Pros: I had no acne or oils in my body for 6 months!

Would you recommend it to a friend? That’s a loaded question.

Acne is something I’ve struggled with almost my whole life. I got my first pimple in preschool (weird flex, but okay), but it was definitely a problem that got exponentially worse with time, and, by high school, it was clear that medical intervention would be needed if I didn’t want my face to be permanently damaged. I started taking Accutane in December of 2018. It is now over eight months since I finished my course, and, boy, do I have some thoughts.

Let’s get the pleasantries out of the way. Clearly (pun intended), my skin is not perfect now. I still get pimples, but they are very small and do not last nearly as long as they used to. Most of the “acne” in my after photo is really just leftover hyperpigmentation. I’m also very fortunate to have quite minimal scarring, considering I never listened to anyone who told me not to pick my skin (but you should). Obviously, all of this is great news, but it does not make the Accutane “struggle” any less challenging. Let’s get into the thick of things.

For those capable of bearing children, the drudgery begins before you ever even take a pill. Two forms of birth control or complete abstinence must be adopted; a series of pregnancy tests follow to legally prove that you are not pregnant. While this may not be much of a hassle for teenagers, it does delay the actual pill-taking process. Once you start taking the medication, the pregnancy test gets rolled into the monthly blood tests that check for all sorts of wacky changes that Accutane could cause.

In all other regards, Accutane is surprisingly egalitarian. Everyone, and I mean everyone, experiences dry skin. Now, I will admit that I’m a very oily person, so Accutane mostly brought me down to socially acceptable levels of sheen. That is, except for my lips, which were constantly peeling, one dry patch of skin on my hand that was practically an open wound, and the skin inside my nose that would bleed but that was not a “nosebleed” in the traditional sense of the word. An odd list indeed, but I think it goes without saying that I practically lived off of Aquaphor and ate up any lip balm that I could get my hands on.

The time of the year and how long you take Accutane certainly make some side effects more prevalent than others, however. For me, starting in December, dryness was the major seasonal concern. But Accutane also causes increased sensitivity to the sun. While this really only became a big issue for me at the end of my six-month course, I still wore sunscreen daily beginning in December. Being the ghost that I am, sun protection was already something I was hyper-vigilant about, but Accutane made me downright pathological about it. Even with my two milligrams of sunscreen per square centimeter of skin (or whatever), I still walked away with a whole host of freckles and moles. I’m (not) over it.

Let’s get more personal, shall we? Going into Accutane, I thought I knew what depression was. I knew that depression wasn’t just being sad, and I thought I would be able to spot it in myself. But it wasn’t until a couple of months after treatment that I realized that I had been depressed. I had told friends and family to keep a lookout for any mental health warning signs, and my dermatologist always checked in with me about how I was feeling, but none of us had caught it. I was right in that I wasn’t sad, but I had chalked up my inability to bring myself to do anything before 9 p.m. as some kind of lack of self-control or willpower. In reality, the loss of motivation I felt was out of my hands and not in my mind. Let me tell you, AP World becomes kind of a nightmare if you crack open the textbook at the time you should be going to sleep. I also barely squeaked out one article for The Fordian last year (although maybe I shouldn’t be speaking in the past tense about this so quickly). I’m happy to report that my motivation is slowly coming back although I’m not yet entirely on the other end. This would have to be my biggest hangup about Accutane. While I definitely don’t regret it, mental health is rightly the issue of most consequence for people considering Accutane.

On a lighter (but literally heavier) note, was what no one, not even r/skincareaddiction, prepared me for: increased lipid count in my blood, which is basically a roundabout way of saying weight gain. While this doesn’t sound like a huge (I have to stop with these puns) deal, it actually greatly restricted the dosages my dermatologist could prescribe me. Every month, my blood would just get fatter and fatter, and every month my dermatologist would want to increase my dose but wouldn’t be able to without pushing me to unhealthy levels of fat blood. I tried to counteract this side effect through my diet, but any decrease I saw was minimal. Like my lack of motivation, these elevated levels have somewhat persisted but are slowly returning to normal.

I could probably write a book about this topic, but this is neither the time nor the place. I could go on about how inconvenient monthly blood tests were, how Accutane made my bones hurt, or how I had to avoid foods rich in vitamin A, but these things are likely out of this article’s purview. I think my face speaks to Accutane’s merits enough on its own, but I hope that I have shed some light on its underbelly or provided some kind of big-sisterly advice.