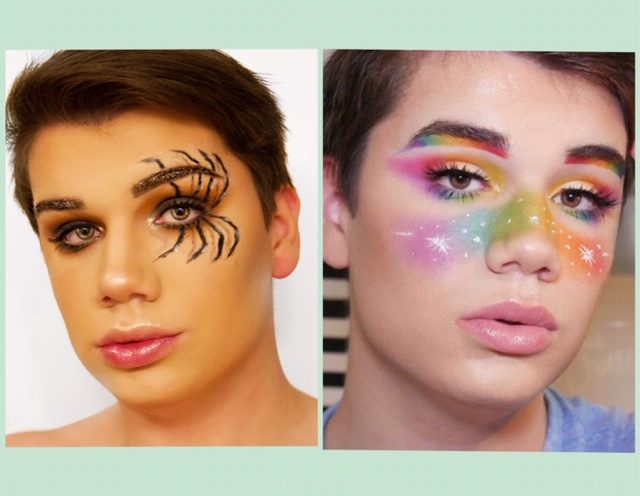 Ross Weiner, a current junior at Haverford High School, is a budding teenage artist who wants to spread creativity using makeup. With an active online presence via Instagram and Youtube, and a collective following of nearly 650 people, he is bringing a breath of fresh air to a world in need of diversity and true freedom of expression.

Weiner’s rise as a self-proclaimed makeup artist and “micro-influencer” began in his freshman year during the Haverford Drama Club’s production of Shrek the Musical. As an actor, he was surrounded by stage makeup behind the scenes and felt eager to help create looks for the show and beyond. A combination of beauty vlog binges and support from close friends, Weiner states, encouraged him to continue pursuing this art more personally. With the help of makeup products recommended by his Youtube role models and a lot of practice, he grew from a hesitant novice to an expressive, self-taught expert. Now, he is able to transform his own face using makeup, creating looks from a simple smokey eye to an interpretation of Stephen King’s “It.” These designs have caught the attention of his peers as well as makeup brands, such as Star Face Cosmetics, who have sent him PR boxes to promote online.

Weiner’s journey with makeup and social media has been unconventional from the get-go, but he asserts that pursuing his passion in a femme-centric space has been an overall positive experience. Though the first friends he showed his makeup to “thought it was funny at first” or “didn’t really expect it,” Weiner is grateful for the amount of love and support he gets from the people close to him today. Specifically, his parents have supported his work completely, citing their son’s true passion for his craft and vision for the future as reasons for their unconditional backing.

With his parents’ blessing, Weiner decided to pursue makeup not only as a hobby, but as part of his future career. He was recently able to apply to his dream school, the Fashion Institute of Design and Merchandising (FIDM) in Los Angeles, and was accepted as a Beauty Marketing and Product Development major in February 2020. After studying in Los Angeles, Weiner plans on developing his own cosmetics brand that will create products for people like him to use in their makeup looks. “Going to FIDM will give me understanding of the industry and how to make really good products. I am going to learn how to market my brand and be the face of my own brand, too,” Weiner explains. With these skills, Weiner knows he will be able to make something outside of the box and target an audience who, like himself, uses makeup as a true creative outlet.

To see more of Ross’ makeup looks, check out his Instagram, @rossmakeupartistry.