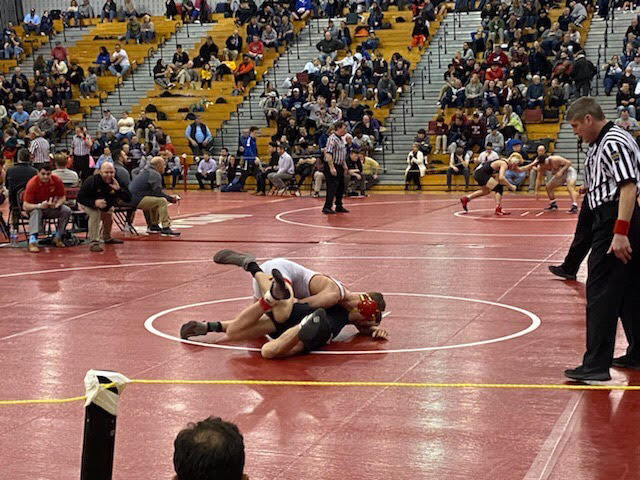 At the Southeast Regional Tournament in Souderton, Stephen Lozano competes against Roberto Lesser of Harriton.

Wrestling has been a prominent sport at Haverford for nearly a century, and Fords Wrestling has earned a competitive reputation over the years. Last month, The Fordian sat down with junior wrestler Stephen Lozano, who won the Most Outstanding Wrestler Award at a recent Central League tournament.

The Fordian: When did you start wrestling? Why?

Lozano: I started in first grade when I was six or seven. It’s always been my main sport. I started wrestling because my dad wrestled competitively in high school and pushed me to do it. At first, I didn’t like it but I like it now.

The Fordian: What do you like about the sport?

Lozano: I love the great satisfaction that comes with winning, and I love the team dynamic.

The Fordian: Wrestling is a one-on-one sport. How do you have a team dynamic if you don’t play the game with your team?

Lozano: Each match between two opposing players contributes to a team score. During matches, we cheer for teammates and get really excited.

The Fordian: In your opinion, what is the most important accomplishment you have had as a wrestler?

Lozano: I won Centrals this year. I haven’t had anything that big before. It came as a big surprise, as I wrestled against an experienced senior. I won the Most Outstanding Wrestler Award at the Central League tournament. The award reflects my performance just for that day.

The Fordian: Who are your coaches? What do you like about them?

Lozano: The two wrestling coaches are Joe Jones and Jim Knapp.  Jones is an experienced wrestler; he knows what he is talking about. Knapp comes from Havertown, and he understands the feeling here.

The Fordian: Do you intend to continue wrestling in college?

Lozano: I may try out for the team, but I don’t intend to wrestle at the varsity level. Instead, I want to focus on academics.