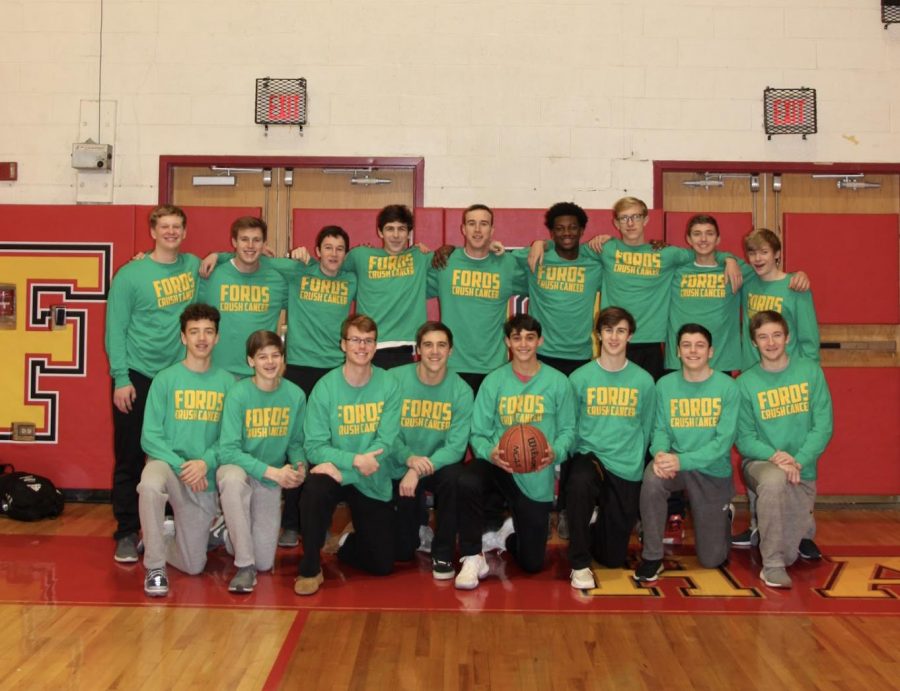 BRYN MAWR – A red sea of Haverford fans flooded into the bleachers on Tuesday, February 11 at Harriton High School as the seconds leading up to the tipoff of the Central League Championship game between Haverford and Penncrest ticked away.

As 18 Haverford boys warmed up on the hardwood, it was with one powerful motor that they anticipated the game ahead of them. Fueled by the same energy that had propelled them to win the last 10 games, the Fords understood their game plan in order to beat Penncrest – to share the ball, play hard on defense, and be resilient.

The Fords came up short of the opposing Lions in the first quarter, 10-6. Coach Keith Heinerichs encouraged them to focus on the remaining minutes, saying, “The least important play is the last play and the most important play is the next.” Junior Hunter Kraiza (20 points) found the gas pedal and pressed hard, hitting three three-pointers to put the Fords up four at the half, 22-18.

Penncrest attempted to regain the lead, cutting the gap to one point during the third quarter. The formidable Haverford defense prevented them from threatening any further, as the scoreboard read 30-27 in favor of the Fords with eight minutes left to play.

The Lions were no match for the sharp-shooting Fords in the final minutes of the game. Kraiza connected on three more triples, and sophomore Nick Colucci also added a pair with 12 points.  With a comfortable lead, 49-40, senior Saleem Dwight held the ball as time expired, marking the end of a 50-year drought.

When the buzzer sounded, the students mobbed the players at half-court, celebrating Haverford’s first Central League Championship since 1970.

Coach Heinerichs said, “Winning the Central League Championship was one of the greatest runs I was ever involved in with a team. We were 2-7 and won 10 straight games to win the championship. In the championship game, a couple of different guys hit big shots like Hunter Krazia, Nick Colucci, and [junior] John Seidman. [Senior] Sean Reynolds, [senior] John Scheivert, and [junior] Will Higson really did a great job on the defensive end.”

Despite feeling stuck at the bottom of the Central League standings at one point during the season, the Fords rallied together to make history. “It was a total team effort to get where we are today. I am really happy for the players. They stuck together and kept believing in each other. I think we all learned a lot about ourselves and overcoming adversity and more importantly never to give up. We have had great leadership from our six seniors all season that led us to the team we are today,” said Coach Heinerichs.