It’s That Time of the Month: The Stigma Surrounding Menstruation 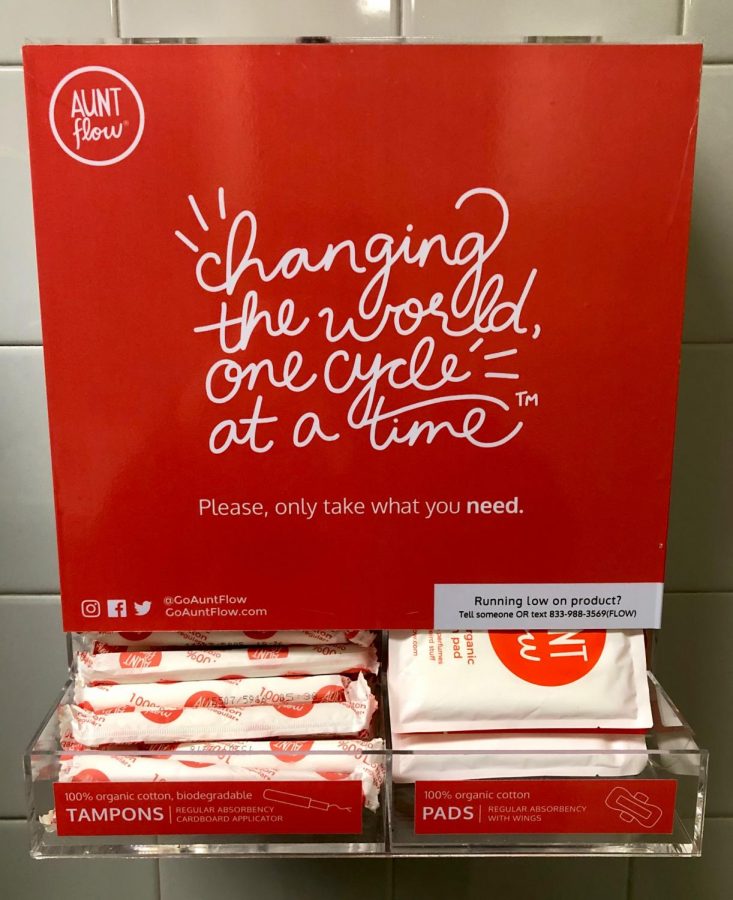 Menstrual products from Aunt Flow, a company that donates one product for every 10 tampons and pads sold, are available in the girls' restrooms at Haverford High School.

“Auntie flo,” “monthly bill,” “riding the crimson wave,” – no matter what colloquial term is used, menstruation occurs for most women every month. While some experience debilitating pain from the dreaded aches and cramps, others can go through their day with little distraction. But for women all over the world, periods are a unifying aspect of their physical anatomy and emotional well-being, as well as a symbol of empowerment.

Why are we so inclined to exclude periods from conversations? Maybe menstruation is not the dinner table conversation topic in all households, but that does not mean that the topic should be universally taboo. Perhaps upbringing plays a role based on how much of a female presence there is in family or in friend groups. However, periods should ideally be just as easily talked about as other common personal hygiene practices, whether one is surrounded by parents, brothers, sisters, girlfriends, boyfriends, best friends, etc.

Period stigma is not a new concept, as there is evidence dating back thousands of years. In an article published by Clue, a popular period tracking app, the author, Anna Druet, discusses the history of period stigmas. In her article, she quotes various religious texts and the first Latin encyclopedia, regarding views on the impurity of a woman that occurs while menstruating. Druet cites other historical studies that deal with the isolation of women during their periods which possibly contributed to the taboo that has developed over time. This article demonstrates how menstruation has evolved into a forbidden topic. The stigma is not credited to a modern-day prohibition of the subject, nor attributed to a specific milestone in history. Instead, menstrual taboos were created from the beliefs and traditions of many cultures, over a long period of time.  However, we will remain just as much at fault as our ancestors if we perpetuate their legacy of menstruation as a female taboo not to be openly discussed.

The stigma surrounding menstruation is not supposed to be eliminated by talking about it more. Rather, it is the idea that people should not have to feel self-conscious about verbalizing the topic. Although menstruation is a common occurrence, women still can express how they feel while having their periods. In our society, people are quick to vocalize their tiredness, hunger, homework, teen angst, among other issues. But, when another daily nuisance such as cramps occurs, women are taught to keep that to themselves. Menstruating is a natural part of life;  women should not have to silence their experience for the sake of others.

Another aspect of this stigma is attributing a woman’s emotions solely to having her period. Just because someone is in a bad mood or irritable, the conclusion should not be made that she is menstruating. Everyone has bad days, including both men and women. Therefore, we need to eliminate the predisposed idea of an automatic link between periods and emotions. Premenstrual syndrome is a reality for many women, who should freely decide how their period affects their moods and emotions without the opinion of another party.

In order to familiarize people with the concept that periods are a normal part of life, it is important not to feel uncomfortable when discussing the subject. The more menstruation is discussed, the less awkward it becomes, and the more accepted it will be in our culture.

Menstruation unifies women all around the world. Talking about periods creates a bond, as it can help girls understand that they are experiencing the same thing and that they should feel empowered that this is a part of who they are. Eliminating the stigma involves a sense of community surrounding the idea that menstruation is something to be proud of. Showing pride in how you are made exemplifies for others how to also demonstrate the confidence associated with having your period. Having the ability to address this intrinsic part of a woman’s life aloud enables one to be an advocate for women in other cultures who feel restrained from speaking of their natural bodily functions.

At Haverford, we have taken steps towards eliminating this stigma. Girl Up, a club at Haverford, has advocated for and achieved providing free menstrual products in all of the girls’ bathrooms. According to the club president, Georgia Evans, the administration has provided funding for these products. This is a big step forward for our school community in closing the gap the stigma creates. The administration is involved, as well as students, who are in charge of restocking the dispensers. Girl Up’s goal assists girls who may not have access to menstrual products, or those who do not want to go back to class to get a pad or tampon when they are already in the restroom.

On a larger scale, on October 19 of this year, the first-ever period rally was held in order to help eliminate the stigma and end period poverty. Some of Girl Up’s members participated in this event in Philadelphia. This movement is essential in spreading the word regarding how period stigma is affecting people all around the world. The more we expand others’ knowledge about menstruation, the more we can improve the lives of women everywhere.

Period positivity is a concept that has not yet achieved universal status, but it has become a recognizable outlook. People everywhere need to advocate for eliminating the stigma by being a part of the conversation in order for menstruation to no longer be regarded as uncomfortable. We must keep in mind that menstruation is a natural occurrence and is not something to be ashamed of. Speak up! Get others involved in the discussion and answer questions to aid in the process of showing how empowering periods are.

At Haverford, we are extremely lucky to now have free tampons and pads in the bathroom. However, this is not the case for all women around the world. Many do not have access to sanitary products, so it is up to us to advocate for those women who are in desperate need.

The next time you have something to say about your period, say it! Let others know that menstruating is a real occurrence that happens to real women. It is unfair for societal norms to make women feel uncomfortable talking about a process that affects their daily lives. Make it known that periods are something to be proud of!