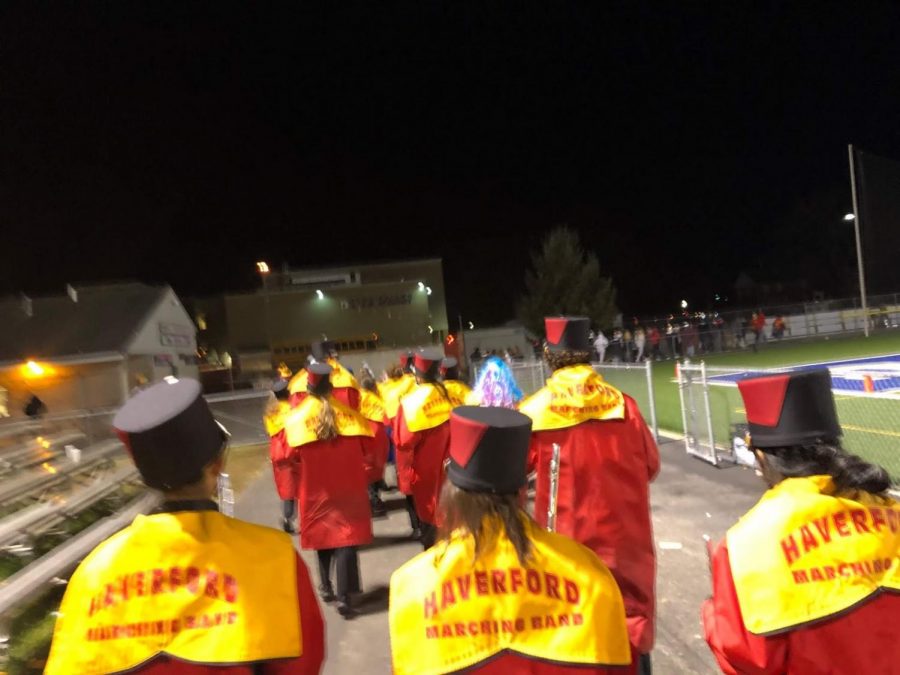 The Haverford High School Marching Band marches out of Kottmeyer Stadium at the end of this season’s semifinal game.

Wearing four layers of clothing underneath my wool uniform, I ran into the band room at 5:10 p.m. on Friday, November 15th horrified that I was going to miss the one and a half hour bus ride to Kottmeyer Stadium. Why was I here on a Friday night in mid-November, stuffing hand warmers into gloves and dreaming of hot chocolate? The answer, of course, was football.

They called it the “District One Class 6A semifinals,” but we just knew that meant it was going to be cold. Most years, our season ends in late October or early November, but this year, having a solid football team and a star quarterback, things were a bit different. This year is the farthest the team has ever progressed into the playoffs. Due to the low temperatures, many in the band had assumed we would only be playing from the stands and would be able to wear whatever we wanted. Imagine our surprise when we found out we would be marching in full uniform.

I won’t claim to speak for the whole band, however. There is certainly a range of perspectives from those who would want to be exclusively in concert band to those who love free admission to all of the football games. There are those who are completely unphased by the cold and others who have to de-thaw on the bus. There are those who are in every musical group in the school and those who one would never expect to play an instrument. That being said, I am probably speaking for the stereotype you’re thinking of.

The marching band is largely paradoxical in nature. Its intended purpose is to promote school spirit, but having the ability to play a musical instrument doesn’t inherently have anything to do with school pride. Therefore, there is a large proportion of the band that is indifferent to how the football team performs. The playoff games, however, have the uncanny ability to conjure up a wisp of school spirit in even the most jaded of musicians. The paradox of the marching band thus morphs into a conflict between wanting the football team to progress as far as possible and wanting to play in the least amount of games as possible. Such has been the nature of this football season.

The most defining characteristic of last year’s football season for the band was the rain; everyone ended up with splotches of blue and purple mold on their music sheets by the end. The weather was fairly moderate this year, but the cold became an ever-increasing problem. The cruelest joke of all was when the cheerleaders would yell, “Let’s get fired up!” and we would yell back, in mid-30 degree temperatures, “We are fired up!” The chant is a required part of our participation grade after all. Oddly enough, there’s no greater motivation for marching than being able to see every breath you blow into your instrument.

Starting off the year with two losses, the football team’s success was not immediately apparent. Then followed ten consecutive wins. Returning to Kottmeyer Stadium where the football team had previously beat Downingtown East, the game with Downingtown West had a lot riding on it. There was much discussion over what would happen with Homecoming if we progressed to the next game. If we made it past that game, many estimated that our season would continue on until mid-December. Unfortunately, depending on whom you ask, neither of these concerns had to be addressed.

The 2019 Haverford High School football season officially came to a close with a 42-18 win over the Upper Darby Royals at Thanksgiving’s Turkey Bowl game. Despite what the Saturday Morning Quarterbacks might say about the disappointing semifinal loss, the Fords quite literally had their best season to date. But consider, for a moment, the real losers of the 2019 football season: the marching band.