R.I.P. ‘Floose’ – ‘Footloose’ goes down as one of the greats 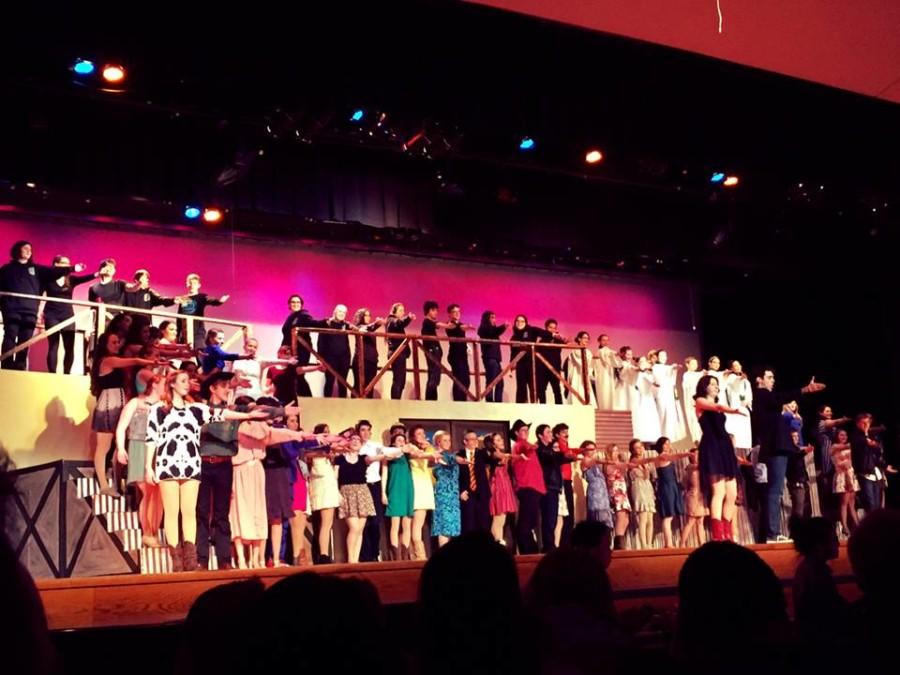 The cast and crew put on amazing performances that makes 'Footloose' one of the greatest shows to hit Haverford's stage.

After last autumn’s disappointing production of Alice in Wonderland, Drama Club was truly “holding out for a hero”. But who could answer such a grand call to action? None other than Drama Club director Heidi and producer Kaitlin McCool heeded the call to arms along with Kirsten Montgomery in stride. Haverford High School’s latest production of Footloose, modeled after the classic and seminal 1984 movie starring Kevin Bacon battling it out with small-town politics in the ancient and everlasting struggle between dancing and the Catholic church. But could the production team of Drama Club truly recreate a classic of a great production after this fall’s horrendous doldrums? The answer is actually a very pleasant surprise; much like Barack Obama’s campaign slogan, yes they can!

The play featured Mr. Scott Berkowitz, as Ren, the protagonist, the man who will go the distance to fight for what is good and holy in this world; dancing like it’s 1984. Scott’s performance is solid all the way through, until the grand finale. Scott was clearly prepared and knew every mile of the play, and delivered strongly, and so did the rest of the Drama Club cast. Performances from all members of the stage cast were fine and brought the play to life like Frankenstein’s monster. And what a monster of a play it was! The play was fast-paced and highly enjoyable; I was not squirming around in my seat. The play definitely was a very high improvement, as Drama Club really does it well with musicals, and perhaps they need to stick more to the formula.

Everything in the production fit together nicely, the choreography was solid, and the songs were captivating and attention-grabbing. Once you were pulled in, you weren’t getting back out anytime soon. I felt like I needed to call the FBI at times because it felt like I was being kidnapped by the production. The play’s runtime clocked at around an hour thirty (not taking in account the intermission), however felt extremely faster than that due to the phenomenal performances of the cast. After the musical I was practically dancing in the streets; the songs were just so catchy!

A quick problem I had with the musical though was the preview given to students of all grades in the High School. The preview revealed the production’s finale! That’s like watching a movie trailer for a comedy and seeing all the good jokes, like going to an open house for a college and getting a degree, like going to church and becoming the pope, like going to a preview and getting the best part of the play! At the end there’s no point in going after you’ve seen it! However that was the only major gripe I had with the production, second to that are the sparse mic problems but after a certain fall play which shall not be named, I was prepared for it. A tertiary complaint was that the “tux” Scott wore at the finale was not a real tux, but one of those fake tuxedo graphic t-shirts. I am highly disappointed with this design choice.

Ultimately, big props to all of the people involved in the production, and a special thanks to Ms. McCool for hooking me up with a press pass. My rating for this play is as high as Scott Berkowitz’s falsetto: 9/10.

Note from the Editors of The Fordian: this is an opinion article. Here at The Fordian, we respect and promote a diverse set of opinions on different things in Haverford High School because we are about having a civil dialogue. If you feel so inclined, please comment or write a letter to the Editor and we will gladly post your opinions too.