Review: While powerful, “The Theory of Everything” falls short of perfection 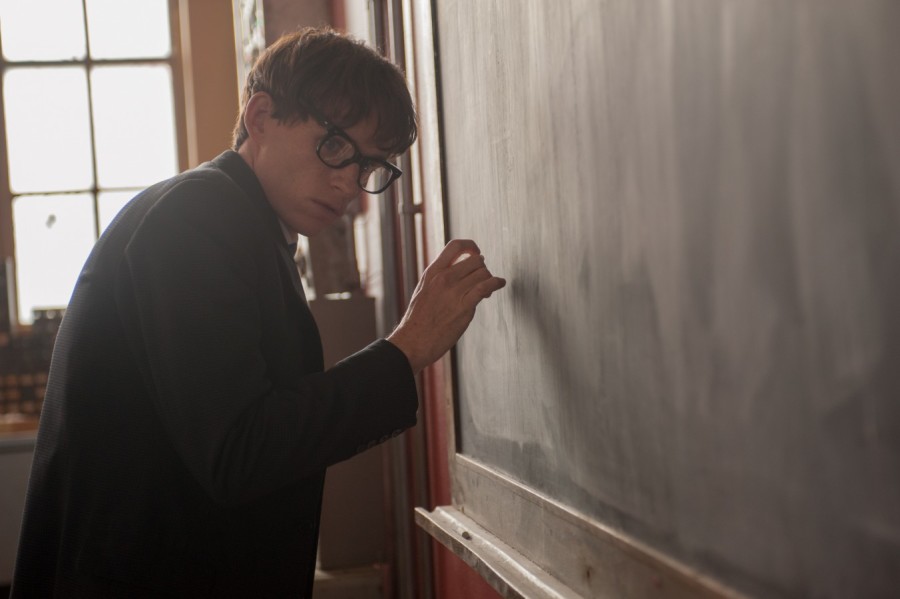 “I have two years to live. I need to work”

“The Theory of Everything” is a film about the marriage between Stephen Hawking and his first wife, Jane. They meet while in college in England, and begin dating soon after. However, Hawking is diagnosed with Motor Neuron Disease, slowly taking away his ability to move and talk, as his muscles degrade. Jane vows to stay with Hawking as he battles his disease, even though he is only given two years to live. However, Jane struggles with caring for Stephen as his condition worsens, and faces inner conflict when she falls for a man she meets in her church choir.

The film has an exceptionally well-chosen cast: Eddie Redmayne and Felicity Jones are nearly perfect in their roles as the Hawkings. They are further strengthened by the additions of David Thewlis, Charlie Cox, and Maxine Peake, among others. Redmayne and Jones are able to capture the essence of their characters through the slightest of facial expressions and changes in body language.

If you began watching “The Theory of Everything” with the expectation of a beautifully filmed love story, you would certainly not be disappointed. The tenderness in the relationship between Jane and Stephen shines through; after all, this relationship is the focus of the film, not Hawking’s scientific achievements. Director James Marsh takes advantage of gorgeous scenery and richly colored lenses. Each era has its own tint, from blue in the early years to sepia tones later. The overall presentation is executed nearly flawlessly. The soundtrack itself deserves its own analysis, and reinforces the impact of the film with powerful melodies.

It’s almost impossible to accept that the same actor portrays Hawking throughout the film, but Redmayne’s flawless execution will undoubtedly win him many more awards this season. Redmayne’s portrayal of Hawking’s physical degradation as he steadily grows more jerky and uncoordinated is absolutely heartbreaking, yet impossibly graceful. He masters the balance of showing both Hawking’s growing helplessness and still-intact mind, even if the film itself devotes little time to his scientific thinking. Redmayne’s expressions reveal Hawking’s personality, even when he has lost almost all muscle ability.

The main problem I had with this film is how hard it makes everything flow seamlessly, tying up loose ends that did not realistically conclude so peacefully. I found myself constantly wishing for more emotions and outbursts from Jane and Stephen. It’s tear jerking in all the conventional ways, and resolves itself too perfectly. “The Theory of Everything” tries so hard to appeal to its audience that, like many biopics, it chooses to sacrifice the facts. While this approach will win it awards, the film seems to forget at times that it is not romantic fiction. It is a portrayal of two people’s actual lives. The film gives us a quick look at Jane’s personal struggles-  but just a glance. We see pain through her behavior, but nothing more substantial. In the end, we are left with an empty drama, centered around Jane’s faltering marriage while falling for another man.

“The Theory of Everything” does not analyze every aspect of Hawking’s life. It doesn’t go farther than giving viewers a brief glimpse of how his mind work, and how he came about his discoveries. But it’s not meant to. This film is about Jane and Stephen’s marriage, and makes this perfectly clear from the beginning. It leaves out certain details about Stephen and Jane’s actual life, avoids direct confrontations between the couple, and steers clear of raw emotional outbursts that undoubtedly occurred. However, “The Theory of Everything” is still a touching glimpse at the personal life of one of the greatest scientific minds of our time, and is worth a watch.